This is how I would refer to most of the Indians. Just two days back we were discussing on the so called taboo topic – "Pre-Marital Sex". This was one of the many discussions that arise after the 'stag' sessions in the official casino of IIML. (Yes, my room has been declared!!).

Surprising to find that even the most outward looking person was trying to defend, "No, Its consequences are very bad on the society!"

"Dude, we make the society". But nah! He would not listen. And well, he was not alone. Many like him, who would not mind doing things like that themselves, but when it comes to take a stand, become the moral police of the country; of the RICH Indian culture; of the Indian Society.

Such people are found in every corner of the country. In rural places, it is understandable; they don't have access to high education level nor the exposure to the global world. They are narrow minded by the way they have been living and their surroundings. But even in the capital of the country – Delhi! Did not expect this!

A guy and a girl are allowed to stay together all day, but well once it is 11PM, NO! What? Can they not indulge in so called immoral activities in the daylight? They very well can! But that is allowed. "What would the society think if they are together all night?" retorted a landlady here.

Everyone is just afraid of the society. The first person is afraid, "what will the others speak of this?", the next one with a similar fear. Internally everyone wants to feel like, and maybe even is, a non-orthodox forward thinking person. But at the outset would like to get limited by the boundaries of the society. The same society they themselves form. Hippocrates.

It is like the Black Monkey that resides in everyone's heart, very well summarised by the latest flick – Delhi 6. The monkey resides within us and we manifest it, give it growth and foster it to become a huge behemoth that it eventually turns into. Sometimes to further our own aspirations, but most of the times just to add to the gossip; become a part of the story.

The conditions become frustrating and suffocating, and well what does it turn into? The same. Carry forward the story. I suffered, so you also suffer. Or is it that we get limited by the thinking and we cannot think beyond?

No point ranting about it. We as a complete society need to change and look forward – A very idealistic far-fetched dream!

Else, just ignore the society that surrounds you. They just need some fodder to discuss on their next coffe break at office – "Hey, you know! This girl was having a male guest at her place all night yesterday".

The reply: "Oh! Really! How shameful? Where is the world heading to?"

Chuck it. Just ignore, and live life they way you want to. Life is too short to be bound by such artificial illogical boundaries!

On an ending note, congrats to "SlumDog Millionaire", for its sweep run at the Oscars. And more so to A.R. Rahman for the laurels he has brought to the country! Even here, we needed a foreign director to bring out something very coherently Indian!

And what do we do? Protest! Slumdog is derogatory! HIPPOCRATES!!

Well, a very happy Christmas to you. What? That was like one and a half months back. I don't remember wishing you then, so the wishes. Better late, than never. I have once again resorted to the easy way. The shortcut to blogging. Putting pictures and writing some random crap, and reduce the effort. I will try my best not to resort to this tactic again, and rather involve myself in better journalistic writing. Huh!

The current economic slowdown has probably hit too hard, and it is said that this is the best time for unleashing creativity. Now you know why the ET IDEAS initiative was kick started at this time? Angel investors is no fool.

Talking about the pictures now, which all sum up, or maybe provide the very much required laughter! 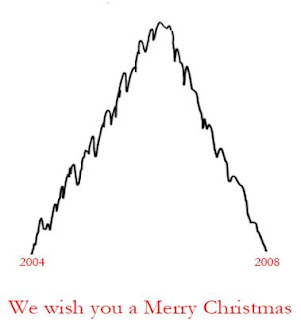 Very well summarises the movement of the market indices through the years. 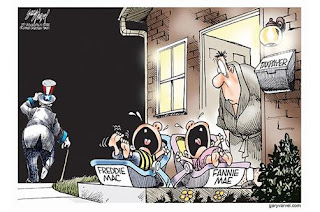 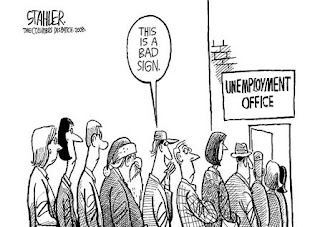 I thought such queues exist only in our densely populated country. 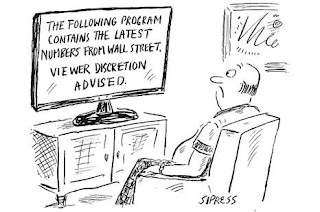 Also, keep the anti-depressants (only one pill) ready in hand. 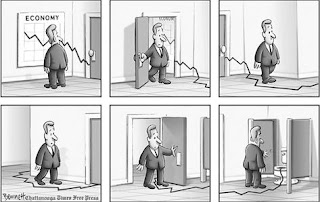 Ah! The graph has hit the ebb. It has stooped so low that there is no more downwards. Here come the good times, now t has no option but to rise. 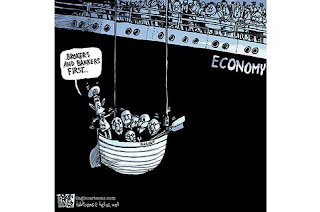 The bankers again get an advantage. 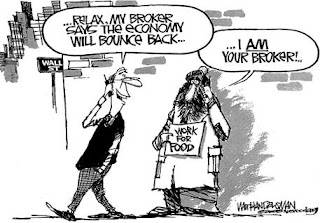 Ha! The broker and the investor. 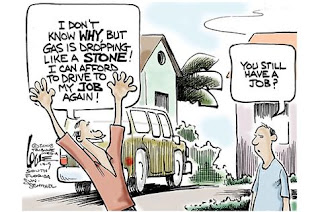 JOB JOB! Where are they? 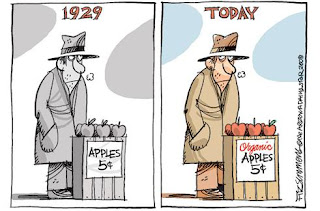 Back to the good old times. 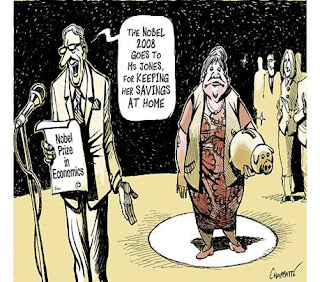 Told you the indian way of living, by loading up stacks of black money in unthinkable un reachable positions is the best form of investing. Talking about black money makes me think. What would have happened to the money hoarders in Zimbabwe? The currency is inflating at levels that would even put to shame Harry Potter's hair growth to shame! 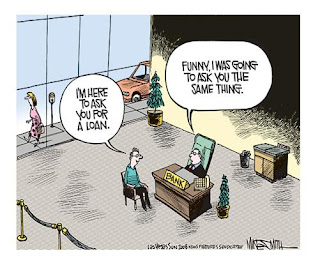 No more loans buddy. Keep your money safe, in the safe. The joke doing the rounds in campus – "FLASH NEWS: One more bank hit by the economic slowdown due to default on Educational loans. Punjab National Bank; Two years back it proudly put up a banner stating that more than 200 students of IIM Lucknow are now its 'esteemed' Customers." 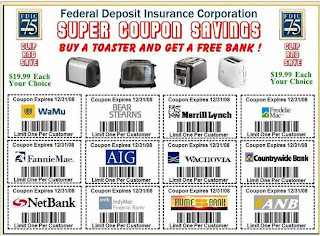 Looking at the conditions it is very much possible for such a free coupon to come up soon. "Buy a Zinger Burger at KFC, and get a scratch card free. "

Laughter is the best medicine in such times. And music is a close second. Nothing like the soothing effect of a Rock Song (pun intended). Thus, the latest song by Zeest, yes yes the BC SUTTA band from Pakistan, has released a new song. This time on the "FINANCIAL FUCK UPS and BROKEN HEARTED PEOPLE", in their own words. You can download the song here.